Skip to content Skip to main menu
Home › Immigration South Africa › The cost of living in South Africa: How does it compare? (2022)

The cost of living in South Africa is more affordable than in many other countries worldwide.

But just how much cheaper is it?

That’s the question we’re looking to answer today. We’ll do this by comparing South Africa’s cost of living to four other nations – the UK, the USA, Germany, and the Netherlands.

How does the comparison work?

We’ll give you a realistic idea of how South Africa’s cost of living compares to the countries on our list by looking at seven standard living costs:

We’ve pulled all the costs from Numbeo, the “world’s largest cost of living database”. The costs are crowdsourced, so keep in mind that costs are averages.

Let’s dive into the comparison

On average, consumer prices in South Africa are lower than in the UK, USA, Germany, and the Netherlands.

The most significant difference is between South Africa and the Netherlands. South Africa’s consumer prices are 43.13% lower.

Rent in South Africa is significantly more affordable than in the comparison countries. According to Numbeo, on average: 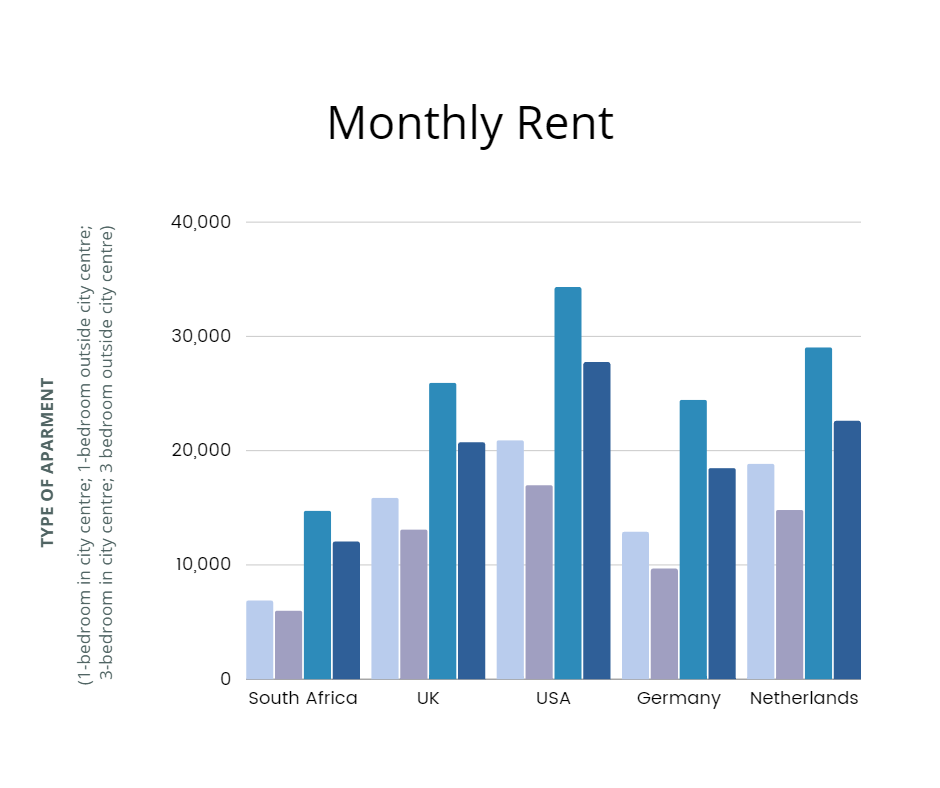 Let’s break it down by looking at the rental prices of 1-bedroom and 3-bedroom apartments both in the city and in the suburbs:

Are you keen to further explore South African rental prices? Use Property24 and IOLProperty, two of SA’s top property websites, to search for apartments and houses in specific cities or suburbs.

Also read our article on everything you need to know about renting and buying property in South Africa.

Whether you rent or own, you’ll have to include utilities like water, electricity and internet in your budget. 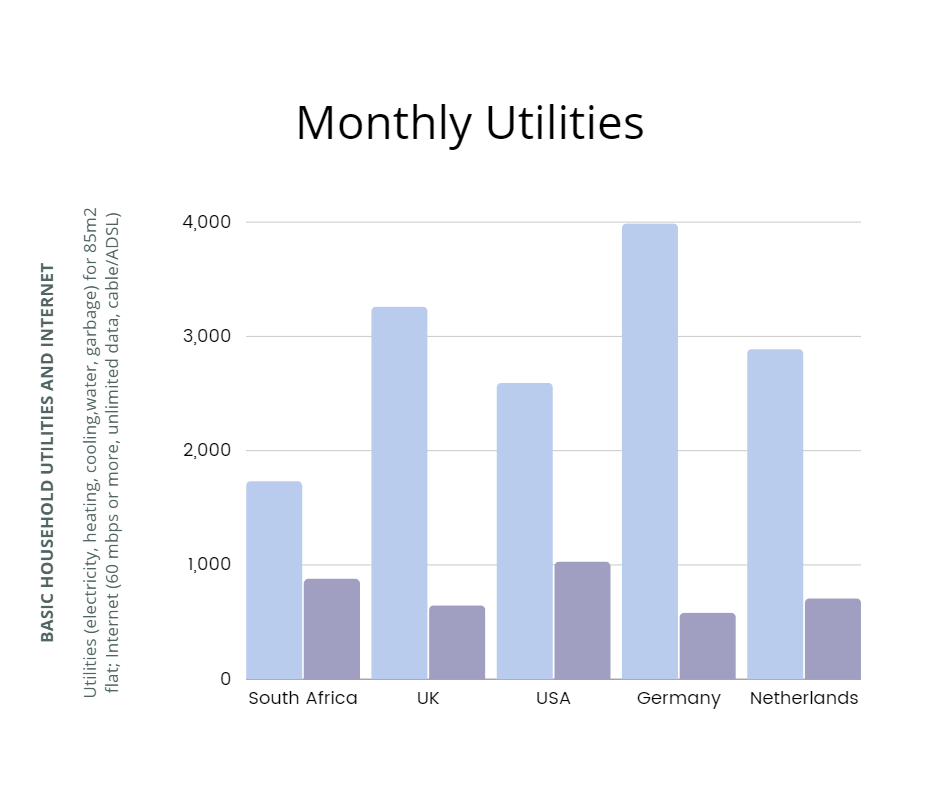 Please note: Fuel prices change often. You can get the latest price on the AA’s website.

Let’s start by looking at the average cost of a basket of groceries in SA and our comparison countries:

As you can see, South Africa is the most affordable place to shop for your family. Now let’s look at the prices of the individual items we put in our basket: 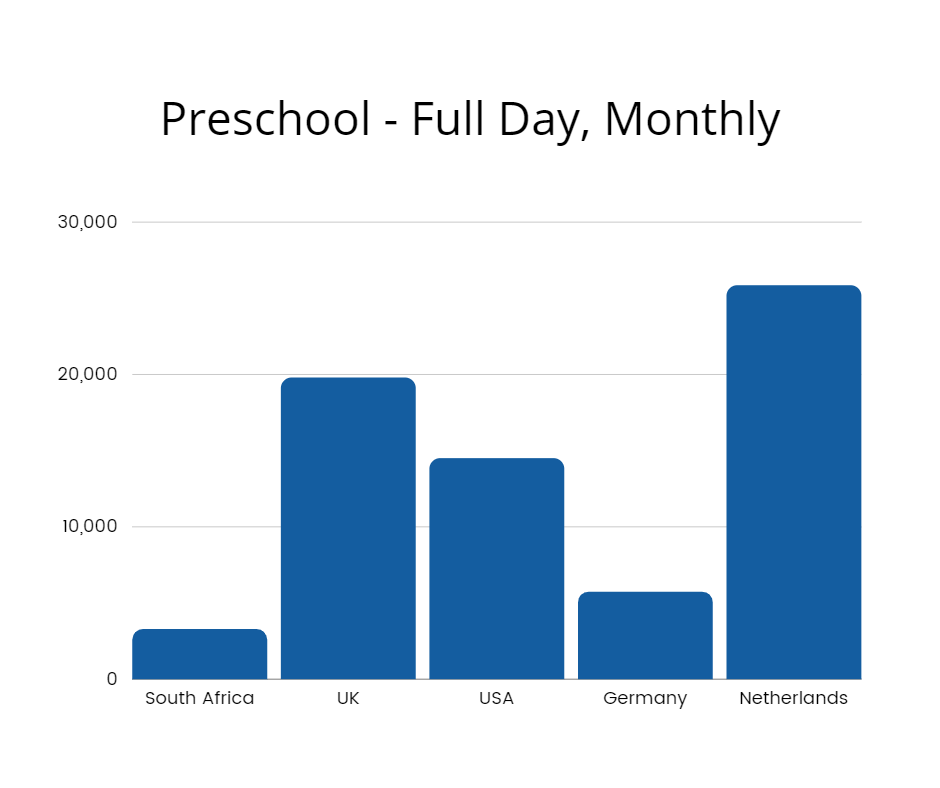 Parents immigrating from the UK, USA or the Netherlands will spend significantly less on preschool fees. While not as much, German parents will also spend less on preschools in SA – roughly 40% each month.

The picture looks similar for primary school, although German parents don’t save as much in this instance. German families will save more than families from the Netherlands, though.

While these costs are for international schools, you’ll also pay to send your children to public schools in South Africa. Public schools are much more affordable than private schools, though. 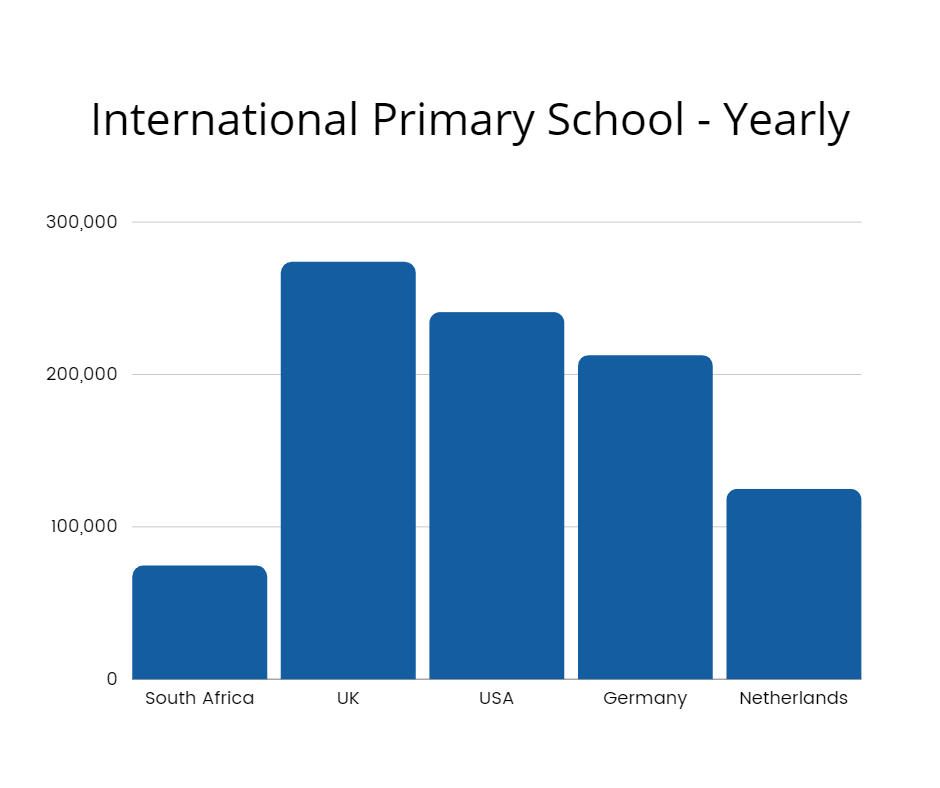 When filling up your closet in South Africa, you’ll spend more or less the same as in the UK, USA, Germany, and the Netherlands.

Not a fan of chain stores? You’ll find many fantastic locally-made options, but you can expect to pay more for these brands.

It’s common in South Africa to own a car. While taxis and e-hailing operators like Uber are common, our public transport system is not nearly as refined as in Europe or the UK.

You’ll see from the table below that cars in South Africa are competitively priced against vehicles in the UK, USA, Germany, and the Netherlands.

Most South Africans finance their cars, and many South Africans opt for used vehicles as they’re more affordable. Prepare for car repayments to make up a significant portion of your monthly salary!

South Africa is well known for its food and wine. Our restaurants are world-class, and our wines often win awards. Our craft beer scene has also exploded over the past couple of years!

The cherry on top? You get to wine and dine at fantastic prices, too.

But what about purchasing power?

You can’t make a cost-of-living comparison without looking at purchasing power.

Purchasing power is important because, all else being equal, inflation decreases the number of goods or services you would be able to purchase.

According to Investopedia, purchasing power is “the value of a currency expressed in terms of the number of goods or services that one unit of money can buy.”

In other words, purchasing power is “the financial ability to buy products and services”.

Knowing how much you’ll earn is a big part of deciding whether or not you can afford South Africa’s cost of living.

Someone earning R50,000 a month can live more comfortably than someone making R25,000 a month.

To get an idea of how much you can earn, go to PayScale. You’ll get averages for a wide range of industries.

It’s also advisable to speak with a recruiter. Recruiters can give you salary expectations based on your skills and experience.

South Africa’s rent, groceries, schooling, and restaurant prices are the most affordable compared to the UK, the USA, Germany and the Netherlands.

However, South Africa’s internet costs are high. It’s only Americans that spend more on staying connected. Buying clothing or a car in South Africa also isn’t much cheaper than in the other four countries.

These higher costs might not make a difference if you’re only visiting or earning in foreign currency, but if you’re earning rands, it most likely will. South Africa’s purchasing power is the lowest of all the countries. That’s why it’s essential to look at how much you could earn in South Africa to understand the impact of South African prices on your pocket.