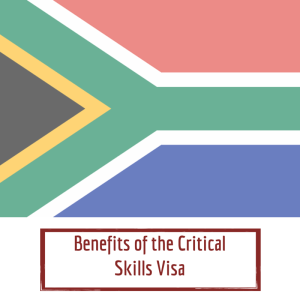 Change is no easy thing to deal with. As human beings, we’re even programmed to keep as much constant as possible to maintain homeostasis, our bodies’ own anti-change mechanism. But often, the greatest opportunities can arise from what can appear to be the most challenging of shifts. And such is the case with South Africa’s 2014 immigration legislation revision.

While the overhaul created some hurdles, the advent of the new law’s critical skills visa brings with it the chance for certain workers to find a job and seamlessly settle in South Africa easier than ever before.

WHAT IS THE CRITICAL SKILLS VISA

The critical skills visa is a working visa based on a critical skills list published by the South African Department of Labour. If your profession is identified on the list, it means you possess a skill set that’s scarce in South Africa and economically in demand, and thus you qualify for this visa.

This point sounds simple, but it speaks volumes. In past, even highly skilled professionals who could greatly benefit the local economy would struggle to land a job in South Africa because businesses were reluctant to offer non-visa holders a position, which is a general work visa requirement. This fact is not based on any sort of xenophobia, but rather on the reality that most companies have little understanding of immigration rules and are inadequately prepared to partner with a foreign job applicant in the application process. The critical skills visa means that you can walk into interviews in South Africa with your documentation in hand, so you can spend your energy on nailing the job you want most – in short, it’s empowering!

The quota work visa, a category that functioned similar to the critical skills grouping in the way that it awarded visas to those identified as having skills scarce to South Africa, was based on a list comprised of just over 50 jobs. The critical skills list identifies over 150 jobs, from sheep shearer to geophysicist. In the same vein, as this list is developed according to economic demand, chances are high that you’ll be able to find a job in South Africa with your skill set.

3.  You can rely on fair evaluation from industry peers.

As it stood before, if you were applying for an exceptional skills work visa or general work visa you often needed approval from bodies that weren’t familiar with your industry. That created somewhat of a subjective grey area that often complicated and slowed down application/approval. The critical skills visa, on the other hand, simply demands approval from a relevant professional body in South Africa. So, if you’re an engineer who’s position appears on the critical skills list, you’ll merely need to get sign off from the Engineers Council of South Africa.

4.  You’re not competing with your peers.

The old quota visa limited the number of visas granted to each kind of professional. The critical skills visa has no such limits, so it’s not a race to the finish where your peers are your competitors.

5.  You can find the right job for you and you can move between employers.

Also unlike the old quota visa, which only allowed visa-holders 90 days to land a job after the visa was granted, the critical skills visa gives visa-holders 12 months to land a job before the visa is invalid. This allows you more time to settle in and ultimately to find a company that’s right for you. Not to mention, contrary to the general work visa, this category doesn’t tie you to a specific employer. So if you don’t like your company or if you get offered a better position, you’re free to move jobs without any hang-ups.

One of the best benefits of the critical skills category is that there’s easy opportunity for permanent residency. Those who wish to pursue this status only need to prove that, since qualification in their field, they’ve attained five years of work experience. That means some people who wish to move to South Africa may have a chance to apply for this immediately. Click here to find out more about permanent residency.

Free consultation for professionals for a critical skills visa

Established in 2006 and having successfully processed over 6000 visa applications, Intergate are ideally placed to assist you in establishing your eligibility for a critical skills visa.

The best next step is to e-mail us here and attach your CV, if you don’t have a current CV why not request a call back here.