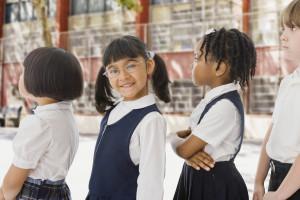 Do you want to emigrate to South Africa? Do you have children? Then one of your main research topics would undoubtedly be schooling.

It could be difficult to gather information, as everything cannot always be found in one place. Intergate wanted to make it a little easier on you. We’ve done the basic research and put everything together in this article.

The South African Schools Act of 1996 stipulates that all children between the ages of 7 and 15 are compelled to attend school. It is the responsibility of the parent to ensure that their child attend school and are registered for each school year.

Registration happens between July and October of each year. That said, it is important to check the registration deadlines of individual provinces.

Schooling happens mostly in English, but some schools also offer classes in one of the other 10 official languages of South Africa.

The types of schools

There are three types of school in South Africa:

Private schools are defined as ‘independent schools’ by the Act. These schools are privately governed and are not funded or aided by the government. Rather they rely mainly on school fees, which are generally quite high. It is widely accepted however that the money spent gives the learners access to education of a high standard.

Public schools receive some funding from government but are also dependent on school fees. Typically these schools also raise funds in other ways to provide a good learning experience. Thanks to the government’s assistance, the school fees for public schools are not as high as those of private schools.

Government schools are controlled by provincial education departments and subsidised by the South African government. These schools provide education for the country’s least affluent people.

The South African education system is divided into three tiers:

Upon completion of grade 12, learners are awarded with a National Senior Certificate (NSC). This certificate serves as a school leaving certificate.

To enroll your child in a school in South Africa, you will need to make an application to the school of your choice. This application will require standard documentation, required from all parents, as well as additional documentation, as you are a foreign national.

The additional documentation required from foreign nationals who emigrate to South Africa are:

If your child will be starting their schooling in South Africa in a public school, it is important to note the admission age:

South African schools have four terms. Terms start in January, which is the beginning of the school year, April, July and October. Inland schools and coastal schools run on slightly different timelines for some terms. Inland schools are in the Free State, Gauteng, Mpumalanga, North West and Limpopo provinces. Coastal schools are in the Eastern Cape, KwaZulu-Natal, Northern Cape and Western Cape provinces.

Moving with the times

Some schools in Gauteng have been issued with tablets to create digital classrooms as part of The Big Switch On. This project has been launched to improve the standard of education and performance at schools.

Each learner get their own tablet, programmed for educational purposes only. The learner have access to learning material, workbooks and other subject matter.

While The Big Switch On has been rolled out only to schools in Gauteng, there are reportedly plans to introduce it to other provinces in due time.

Intergate can help you make an application for a study visa for your child. Simply contact us via phone or email to speak to one of our consultants. To get us to call you instead, all you have to do is request a free call back. When we receive your details, a consultant will get back to you within 24 hours to answer all your questions.